Visitors to Koontz Lake can enjoy the county-owned beach property at the end of Cherokee Road east of Tippecanoe Drive. Parking is available at the Koontz Lake Association building, located at 10870 E. Cherokee Road, which is just a short walk to the beach.

The Indiana DNR also operates a public access site on the southeast side of Koontz Lake, just across the Marshall County line. The ADA-accessible site includes a concrete boat ramp and shoreline fishing for bluegill, redear, crappie and largemouth bass. 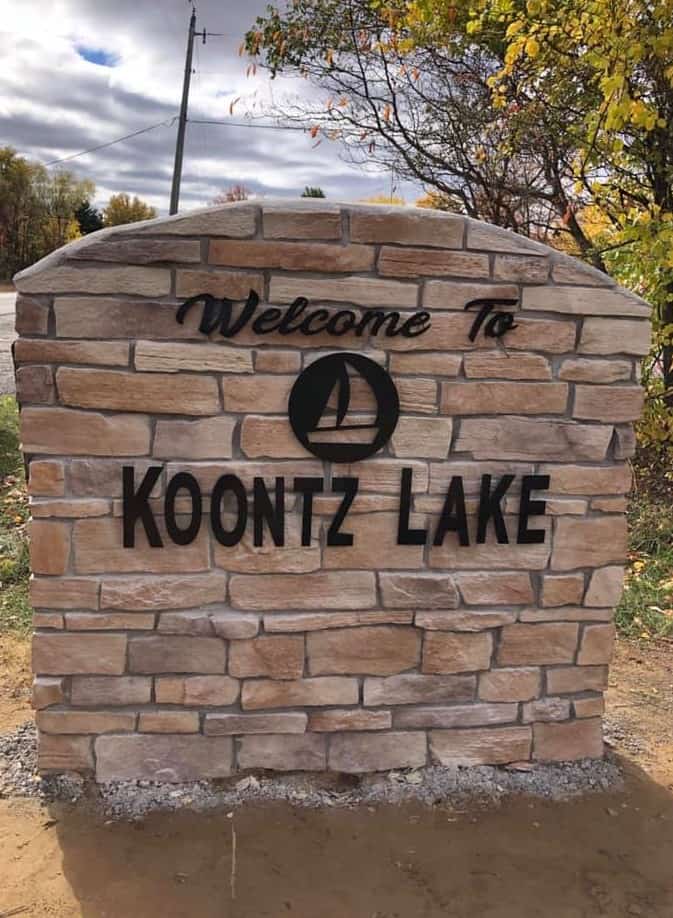 The future Starke County townships of Oregon and Davis were included within St. Joseph County at that time. The rest of northwest Indiana was not organized and was home to the Pottawatomie Indians.

When the Federal Census was taken in October of 1830, it listed 31 families with a total of 287 people in all of St. Joseph County. No doubt many of them were located in the South Bend area.

Koontz Lake, originally called Woodworth Lake, would have been attractive to settlers, because the possibility of its natural outlet supporting a water powered mill. But it is not known if any of those 31 pioneer families had settled there in 1830.

All of northwest Indiana with the exception of La Porte and St. Joseph Counties, which had already been formed, was surveyed in 1833-34. Fulton, Jasper, Marshall, Newton, Porter, Pulaski and Starke Counties were then formed by a state statute in 1835 but not necessarily organized as political entities with their own governments.

The 1833-34 survey maps show Koontz Lake was called Woodworth Lake and was located in the top center of section 12. Later maps also show it as a single body of water well within section 12 but refer to it as Clear Lake.

Although a few settlers bought land in the general vicinity as early as 1838, Samuel Koontz, Sr. was the first to see a business opportunity and buy land near the lake. That was November 6, 1848. He had traveled to Starke County on horseback from Ohio the year before.

Others had no doubt thought the wild marshy area was of no value for farming. But the outlet for the lake ran through Samuel Koontz’s property, and he quickly built a dam to power an “up & down” saw mill.

This resulted in one of the first lawsuits in Starke County, as his neighbors complained the dam was detrimental to their farm land. But the federal courts ruled in favor of Mr. Koontz and awarded him title to all the waters of the lake.

When Samuel first built his dam, the lake was about a half mile east of him. But soon the lake increased in size and depth due to the dam. Before long the lake’s edge was right at his mill.

Samuel abandoned his saw mill and tannery and built a grist mill in 1851. He rebuilt

twice in the 1850s when water washed out the dam. His son, Samuel Koontz, Jr. took over in 1860 and ran the mill it until 1925. Farmers came from all over the area, sometimes waiting through the night, to have their grain milled. Koontz kept a portion of the milled grain as payment for services. According to some reports the mill was capable of producing 40 barrels of flour every 24 hours.

A post office was opened there with the name Clear Lake P.O. on March 3, 1858. Jacob Kelver was the first Postmaster. This post office was short lived and mail service was transferred to Walkerton by the time the Civil War broke out.

During the 1860s and 1870s, Koontz Lake was just west and south of a vast Huckleberry marsh that encompassed 500-1000 acres. When the Huckleberry season was in full swing, thousands of people descended on the area sleeping in tents and partaking of various vices in makeshift taverns and quarters. The Huckleberry Queen was one of the frequent visitors of notorious character. The marsh was finally burned down by a mysterious blaze and was never restored.

By 1876, there is a separate body of water on the boundary between section 11 and 12 with a stream connecting them. A dam on the outlet is shown just to the west of this new body of water. All maps after 1876 refer to the lake as Koontz Lake, as it is known today.

It seems to be a mystery why the lake was first called Woodworth Lake. It was so named on the 1833-34 land surveys. There were Woodworths in St. Joseph County on the 1840 and 1850 censuses. But there were no Woodworths in Starke County until Wheaton Woodworth moved here between 1860 and 1870 from Marshall County. His wife was Mary. The censuses show they only had an adopted daughter Grace.

Wheaton Woodworth lists Ohio as his birthplace, but shows both of his parents were born in New York. I have not discovered if Wheaton was related to Phillip or Henry Woodworth.

This 1898 map shows the Koontz Lake Grove Club owned considerable property along the south shore and included a club house. The original lake bed is denoted by dashes. Much of the land is owned by either, Samuel Koontz or his daughters Mary A. Woodworth and Matilda Woodworth.

The Koontz School was located nearby. It was a one-room school officially known as Oregon Twp. School District #1. It was discontinued around 1925.

The Koontz Lake Fire Department was founded in 1942 and served all of Oregon Township for many years.

Tourist-wise Koontz Lake never had the direct benefit of a railroad line, although Walkerton was only 4 miles north and had several railroad lines running through it. By 1950, there were approximately 700 cottages at the lake.

On Palm Sunday 1965 numerous tornados ripped across the Midwest. One of them caused much devastation in and around Koontz Lake.

The Koontz Lake Wetland Conservation Area (58 acres) is along the north side of Koontz Lake and is owned and maintained by Indiana Department of Natural Resources.

In 2008, the Koontz Lake Regional Sewer District is working to develop and manage a sewage collection and disposal system.

The following are just a few businesses and places from the past: Anderson Hotel